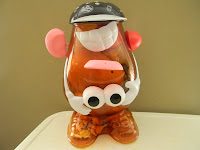 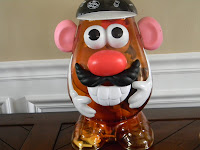 So, i can't even begin to give credit for this idea since I've seen it on numerous websites, but just know that the idea isn't my own, just the adaptation. Anyway, i used this for junior primary. I wanted to do something light and fun, thus the potato head. I took off the face pieces and had a child pick one. He then got to place the piece anywhere on the potato head and we sang the corresponding song. I figured that junior primary would like this but i didn't count on how much! They laughed and giggled so hard when the pieces were placed and already want it back. It was so fun to listen to their giggles. Here are the songs I used:
EYES: Popcorn Popping (i looked out the window...) or I love so see the temple.
NOSE: Head, shoulders, knees and toes (sing it several times, omitting the nose, touching the nose without saying the word, backwards, etc.)
MOUTH: Smiles
EAR: Listen, Listen
EAR: If I listen with my Heart
Another way to use the potato head would be for "head, shoulders, knees and toes". Just arrange the pieces on the face in the order that you'll sing the last 4 body parts of the song. (starting top to bottom) Very silly and sure to bring giggles.
Posted by Darcy at 10:39 AM