i know the words, do U-NO them? 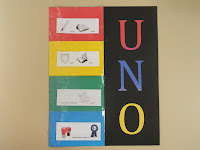 Our ward knows Scripture Power but mumbles their way through the 2nd verse so i decided to spend most of our time working on that song. I decided to play UNO. I saw the idea somewhere several months ago but couldn't remember where i saw it so i just came up with my own version. This works GREAT for learning (or refreshing) a verse or new song. Basically, the idea is you sing whatever phrase is on the poster color that matches the card played. I laminated the colored squares on the poster so that i could easily interchange song phrases without ripping the poster. In senior primary, i gave each row (whether there was a teacher on that row or not) 7 cards. We played just like the game. Each row took a turn placing a card on the board. If red was played, we sang the phrase on red. If a green was played, we sang the phrase on the green. I had them sing fast, slow, just boys, just girls, etc. just to shake it up. When the "specialty" cards were played, this is what we did: DRAW TWO: the class that played this card chooses 2 classes to sing that phrase with the matching color. SKIP: Sing the phrase skipping every other word (this was HARD!!) WILD: the class that plays this card gets to pick what color to sing and also chooses a "sing like A..." card to determine how we sing it. (eyes closes, holding tongue, etc) DRAW FOUR: Choose the color and begin singing the song (from any point in the song) and when you cut off in the middle of the song, the next class has to sing the following 4 words. REVERSE: Sing the line previous to the one that matches the color played OR start singing and cut them off and the next class sings the previous phrase from where you cut them off.
I prepared several word strips for different songs so that we could switch up the songs we were working on. You can just use words but i used pictures since i already had the pics for junior primary.
For junior primary, i had taped colored squares of paper under each chair. They found their papers and we did diff. activities for each color. Ex. those with blue papers sing the words on the blue line, while those with red papers hum. Or those with yellow papers sing words on yellow line while those with green papers clap. I tried to involve all the children so they wouldn't get bored. We have a VERY young junior primary and keeping their attention is difficult. You could even have them swap colors with their neighbor. We also sang songs like head shoulders knees and toes and they could only use their hand that was holding the paper to touch the diff. body parts. Anyway, there's so much you could do with this for junior primary!
I was impressed with how quickly they learned the 2nd verse of scripture power using this method. And they seemed to have fun. I will use this method again to teach other less known verses. Although, next time i'll probably "stack the deck" better for senior primary and put all the specialty cards in the stacks i give each row. It made it more fun to have those cards played yet we never seemed to have enough of them played. Anyway, have fun!!!
Posted by Darcy at 8:50 AM